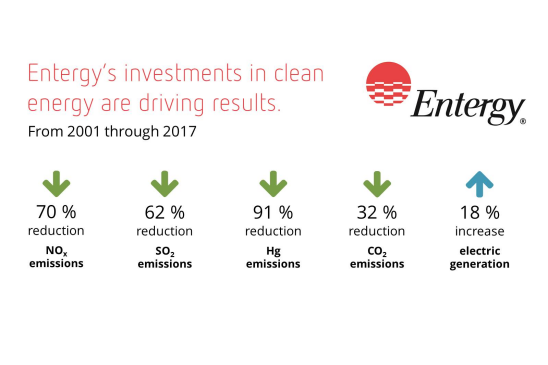 The nation’s largest electricity producers’ transition to clean energy is reducing emissions, and Entergy Corporation is helping lead the way.

In the latest comprehensive analysis of U.S. power plant emissions from the 100 largest electric power producers, Entergy is the sixth-largest producer of electricity and ranks fifth in the production of zero-emitting energy. Entergy’s CO2 emission rate is the fourth lowest among the top 20 privately-owned and investor-owned power producers.

The analysis, based on 2016 data, shows that a significant shift in market dynamics has happened, resulting in 22 percent lower CO2 emissions nationwide than a decade ago, even as the U.S. economy has steadily grown.

Entergy’s commitment to reducing emissions from its power plants is helping drive this reduction in the nation’s emissions.

Learn more about Entergy’s portfolio transformation, energy efficiency initiatives and other actions contributing to lower emissions in our 2017 integrated report.

The nationwide data is presented in the 14th edition of Benchmarking Air Emissions of the 100 Largest Electric Power Producers in the United States, a report that Ceres, Natural Resources Defense Council and partners like Entergy have released since 1997. The report is based on publicly reported generation and emissions data from the U.S. Energy Information Administration and the Environmental Protection Agency. For the first time, the report’s power plant data has also been compiled into an interactive map and online emissions trends tool.

The 2016 data reveals that nationwide:

Also in the report:

“It is encouraging to see the progress that U.S. power companies are making in accelerating the transition to the clean energy economy, especially given the increased role that the sector will need to play to achieve our longer-range decarbonization goals,” said Dan Bakal, director of electric power at Ceres.