Insights > We Have a Winner: Entergy a Top 10 Clean Transportation Leader in New Orleans Metro Area

We Have a Winner: Entergy a Top 10 Clean Transportation Leader in New Orleans Metro Area
By: Margaret Bucci If there were a NASCAR event based on running the cleanest vehicles rather than the fastest, Entergy would be on the leader board, helping the Greater New Orleans community capture a green checkered flag.

Last year, Entergy Corporation operated one of the cleanest fleets of vehicles in the New Orleans metro area, helping the business community accomplish sustainability goals and set new records for fuel and emissions reductions. The company ranked in the top ten among 30 businesses that received a Clean Fleet Award from the Regional Planning Commission’s Clean Fuel Partnership and Louisiana Department of Natural Resources.

“As an environmental leader, Entergy has been on the forefront of investing in clean transportation technologies for many years,” said Byron Montgomery, Entergy’s vehicle fleet superintendent for South Louisiana and Texas. “We’re pleased to see that our strategy is making a positive impact on the environment and setting the stage for even greater fuel and emissions reductions in the future.” 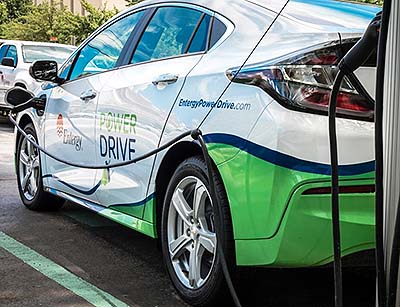 Throughout its four-state service region, Entergy operates 138 electric vehicles, 808 biofuel vehicles and 76 propane forklifts. In 2018, these technologies resulted in total reduced of 1,243,725 gasoline gallon equivalents and avoided of 16,167 tons of greenhouse gas emissions.