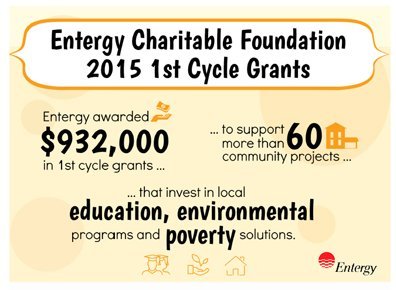 · $100,000 to the Louisiana Children's Museum in New Orleans for an Early Learning Village in City Park. The village will include a literacy center, parent-teacher resource center, a nature center, early care and learning center, and theater. Hands-on programs and workshops will be offered to parents and childhood professionals on an 8-acre site.

· $200,000 to the American Red Cross for disaster relief in Entergy service areas. Red Cross assistance recently has been given to Texas and Mississippi to respond to flooding and tornado damage.

· $150,000 to Teach for America in the Greater New Orleans area. Entergy's support will help close the academic achievement gap for students in 40 underserved schools.

· $35,000 to Kids X-Press Inc. in White Plains, New York, for the Earth Day edition of student-produced magazine focused on climate change and sustainability. The project will engage students from the Bronx and Westchester to create content. KXP will then produce and distribute 20,000 copies of the Earth Day edition to raise awareness of the importance of global warming and sustainability. Students and readers also will be educated on environmental and corporate stewardship issues, nuclear power's role in energy, career opportunities and the true meaning of green industries.

· $20,000 to Edison Plaza Museum in Beaumont, Texas, to continue its educational mission for the community. The one-of-a-kind museum offers educational tours to schools and at-risk groups.