Dozens of people were on hand for the special We Power Life – Capital Region event with Entergy leaders today at Manship Theatre at the Shaw Center for the Arts. 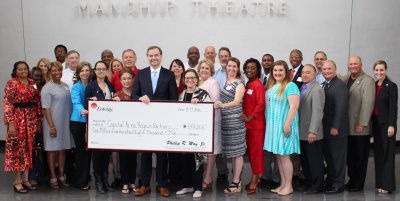 Over the past two years, the grants that have been awarded to agencies in the south Louisiana region totaled $1,108,000. The monies have gone toward many major projects that run the gamut from education and poverty to economic development and the environment.

In the past year, Entergy awarded approximately 120 grants in the capital region totaling nearly $1,108,000.

As a special thank you, the agencies were invited to enter a drawing to win an additional $5,000 in partner appreciation grants. To win, all they had to do was submit a photo of one of the events that Entergy helped sponsor. Those agencies winning $500 grants each were the Capital Area United Way and the JL Foundation. Agencies that won $1,000 grants each were the Foundation for Womans and the Louisiana Youth Seminar. Winning the grand prize grant of $2,000 was the Big Buddy Program.