THE WOODLANDS, TEXAS -- To reduce the risk of levee failure and help protect the community, Entergy Texas, Inc. officials took Lewis Creek units 1 and 2 offline last night. This will allow the continued reduction of water level in the Lewis Creek Reservoir. 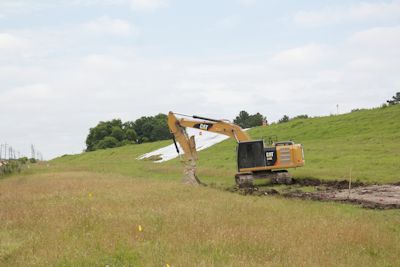 "This is absolutely the right decision for the protection and safety of Montgomery County residents and the long-term reliability of the plant," said Sallie Rainer, president and CEO of Entergy Texas, Inc.

Company officials and the Midcontinent Independent System Operator, system reliability coordinator for Entergy, confirmed that taking the units offline will not result in any immediate reliability issues for Entergy Texas customers.

Thursday, Entergy Texas notified local authorities of the potential for dam failure at the reservoir because of persistent rainfall experienced in the surrounding area causing extensive saturation of the soil that make up the reservoir dam. The company has been working around the clock to make necessary repairs to impacted areas of the dam.

Project managers from Entergy Texas met Saturday with representatives of the Texas Commission of Environmental Quality and the Army Corps of Engineers to review progress made to repair the Lewis Creek reservoir levee. Both the Corps and state officials expressed satisfaction with the work that has been done thus far to stabilize and strengthen parts of the dam impacted by heavy rains earlier this week.

Entergy is hauling in truckloads of limestone rock to stabilize the base of the levee, after building more than 665 yards of matted road to gain access to hard-to-reach areas.  Protective covering has been placed in several areas of the levee. Repair work will continue as long as weather conditions allow.

Entergy's customer information center will again be open today at 8 a.m. at the Montgomery County Community Center at 600 Gerald St. in Willis.

"We continue to work closely with the state and local emergency authorities and appreciate their support," said Rainer. "We understand the abundance of caution that led to the county's decision to call for mandatory evacuation by those in their identified area of concern near the Lewis Creek reservoir."