BATON ROUGE – Small businesses damaged by flooding in southeast Louisiana are among the beneficiaries of the Entergy Charitable Foundation's second round of grants awarded in 2016. Grants to the Louisiana Association of Business and Industry and other nonprofit organizations in Louisiana communities totaled more than $1 million. LABI created the Louisiana Small Business Rebirth Fund to help flood-damaged businesses rebuild and re-open.

Requests for funding through the Entergy Charitable Foundation are reviewed twice annually. Paired with awards made in the first round of funding last year, foundation giving in Louisiana communities totaled more than $1.9 million in 2016. 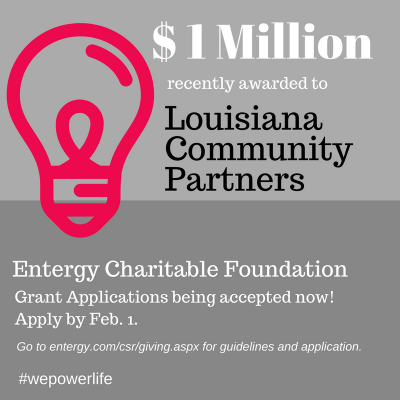 “Charitable contributions are one of the many ways in which We Power Life in communities by expanding resources and services for those who need it most,” said Phillip May, president and CEO of Entergy Louisiana. “Employees and retirees also contribute to our efforts by volunteering for charitable organizations in ways that support our mission to add value to the communities we serve.”

Louisiana programs supported in the second round of 2016 Entergy Charitable Foundation grants include:

A complete list of 2016 grant awards can be found at entergy.com/ecfgrants.

Each year Entergy shareholders award approximately $16 million to local nonprofits through various grant programs. Entergy Charitable Foundation grants focus on education, poverty solutions and environmental programs that improve the quality of life in communities served by Entergy. In 2016, more than $2.8 million was contributed through the program.

Entergy Louisiana provides electric service to more than one million customers and natural gas service to approximately 93,000 customers in the greater Baton Rouge area. With operations in southern, central and northeastern Louisiana, the company is a subsidiary of Entergy Corporation.