In response to the extensive damage caused by the storm, Entergy deployed a workforce of approximately 27,000 workers from 41 states.

“We are grateful for the thousands of men and women who worked tirelessly to safely restore power for our customers,” said Rod West, Entergy utility group president. “Hurricane Ida inflicted significant damage on Entergy’s electric system that resulted in 948,000 outages at its peak. Our job is not yet complete and despite the extent of the damage, the teams have made significant progress. We anticipate that all remaining customers who can safely take power should be restored by Sept. 29.”

Over the past five years, Entergy’s operating companies have invested $9.5 billion in transmission and distribution assets that met or exceeded then-current resiliency standards. Ida demonstrated the resiliency benefits of these investments. Along a transmission path originating in Port Fourchon, where Ida made landfall, only three out of the 387 newer, more resilient structures were destroyed. In contrast, a seven-mile transmission line with pre-1997 design structures along this same path was taken down by Ida, with more than half of the line’s structures destroyed. 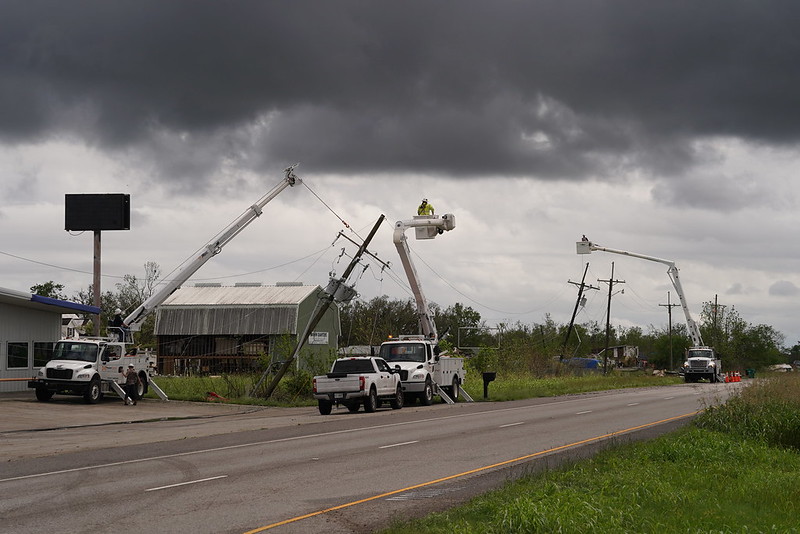 Hurricane Ida presented a severe wind-loading event that caused significant damage to the distribution system. With strong Category 4 strength winds upon landfall and sustained hurricane strength winds through New Orleans and beyond, Ida caused substantially more distribution pole damage than previous storms. On key lines in coastal areas, poles are being replaced with more resilient Class 1 grade distribution poles that can be configured to withstand winds of more than 130 miles per hour, which exceeds current requirements. To meet the intensity of future weather events, Entergy recognizes the need for accelerated system hardening, as well as continuing to advance its preventive maintenance programs including vegetation management and pole inspections.

As part of the recovery efforts, Entergy has worked to provide support for its communities while they recover from Ida. The company deployed 165 commercial scale generators to power critical community infrastructure such as medical facilities, gas stations, grocery stores, municipal water systems and community cooling centers in advance of their power being restored. Further, Entergy’s shareholders committed $1.25 million in financial support to help affected communities rebuild and recover from the storm.

Total restoration costs for the repair and/or replacement of the electrical facilities damaged by Hurricane Ida are estimated to be in the range of $2.1 billion to $2.6 billion. Most of the storm costs were incurred by Entergy Louisiana and Entergy New Orleans. The preliminary estimate for Entergy Louisiana is $2.0 billion to $2.4 billion, and the preliminary estimate for Entergy New Orleans is $120 million to $150 million.

Entergy also expects utility revenues in 2021 to be adversely affected, primarily due to power outages resulting from the hurricane. The company’s initial estimate of lost non-fuel revenue is approximately $75 million to $85 million, with most of this impact occurring in Entergy Louisiana’s and Entergy New Orleans’s service areas, $65 million to $70 million and $10 million to $15 million, respectively. The financial impact of the lost revenue is expected to be partly offset by lower operation and maintenance expenses.

The company has a long history of working collaboratively with its regulators to recover storm costs. Entergy Louisiana and Entergy New Orleans are considering all available avenues to recover storm-related costs from Hurricane Ida in a manner that will minimize the effects on customers, including federal government assistance and securitization financing. There are well-established mechanisms for recovery of prudently incurred storm costs in accordance with applicable regulatory and legal principles. Further, Entergy has been coordinating with Governor Edwards and the Louisiana congressional delegation to seek Community Development Block Grant disaster recovery funds and other funding options from the federal government. President Biden, who has been a vocal advocate of support for the recovery of the Gulf region, recently sent a $24 billion request to Congress for supplemental disaster appropriations, which includes $10 billion for Ida impacts nationwide. If approved, a portion of these funds could be allocated to Entergy to, in turn, reduce the customer burden dollar-for-dollar.

Forward-looking statements are subject to a number of risks, uncertainties and other factors that could cause actual results to differ materially from those expressed or implied in such forward-looking statements, including (a) those factors discussed in this release and in Entergy’s most recent Annual Report on Form 10-K, any subsequent Quarterly Reports on Form 10-Q, and Entergy’s other reports and filings made under the Securities Exchange Act of 1934; (b) uncertainties associated with rate proceedings, formula rate plans and other cost recovery mechanisms, including the risk that costs may not be recoverable to the extent or on the timeline anticipated by the utilities; (c) uncertainties associated with efforts to remediate the effects of major storms and recover related restoration costs; (d) legislative and regulatory actions and risks and uncertainties associated with claims or litigation by or against Entergy and its subsidiaries; (e) effects of changes in federal, state or local laws and regulations and other governmental actions or policies, including changes in monetary, fiscal, tax, environmental or energy policies; (f) the direct and indirect impacts of the COVID-19 pandemic on Entergy and its customers; and (g) the effect of technological change, including the cost, pace of development and commercialization of new and emerging technologies.