The New Orleans Saints are going into the fourth game of regular season play on a high note, but the season has been a bit of a nail-biter even with a three-game winning streak. Only a few points have made the difference between wins and losses in the last few games. Fans like Nick Parker are hoping for less stress, more fun and a big win at the Superdome on Monday.

Parker, a lineman first class from Southaven, Mississippi, will be honored as an Entergy Lineman of the Game when the Saints face off against the Washington Redskins Oct. 8.

“Nick is a team player you can count on,” said Robbin Jeter, Entergy Mississippi vice president of distribution operations. “He’s a leader among his peers when it comes to safety and health.  As a stretching champion for his local office, Nick leads the team in daily exercises to start the day out right. He’s also quick to respond and work wherever he’s needed, even when the call comes after hours. We’re proud to recognize Nick for his contributions to our team and thank him for his dedication to serving our customers and communities.”

Team spirit is second nature to Parker. He grew up in Hammond, Louisiana playing sports, including some football, though basketball and baseball were his real passions. Time on the field with teammates and watching his favorite teams (the Dallas Cowboys, LSU Tigers and New Orleans Saints – in that order) helped him learn the importance of working together toward a common goal.

“Being around my fellow brothers day in and day out and the camaraderie we have is the best part of my job,” he said. “The diversity of our crew is amazing and it’s a lot like a sports team. We have people with decades of experience, those who are in the middle of their careers and some who are new to the job. We work well together because of that breadth of experience. We also have to trust each other and act as a team because our lives depend on it.

“When I look across the pole and see my coworker on the other side, I know he’s got my back. And I’ve got his. We’re not just colleagues, we’re family and we want each other to go home safe every day so we can be there for one another the next day.” 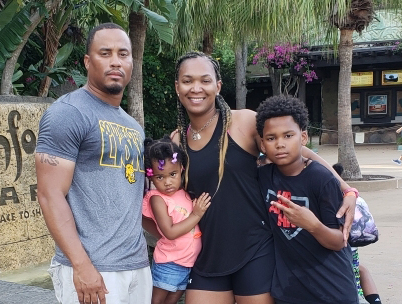 Parker, who has been with the company for nine years, became a lineman because the job offered stability for his family. He and his wife, Sha, have two children, Jayden and Kyla Jade, who keep them active.

“I’m an energetic guy and like to have fun, especially with my family,” he said. “After work, I spend a lot of time with my kids playing video games or baseball and working out. As much as I love doing those things, I’m really looking forward to sharing this experience and some quality time with my beautiful wife.”

Russell Bennett, Entergy Mississippi public affairs executive, will join Parker on the field during the game to thank him for helping Entergy power lives!