NEW ORLEANS -- Crews continue working on the second phase of Entergy New Orleans’ technological upgrade to the electric power transmission system -- Ninemile generation-Derbigny substation -- and will begin on the first of a series of interstate crossings this week. Weather permitting, work crossing Interstate 10 will take place on Saturday, Nov. 14 and Sunday, Nov. 15 near Xavier University.  Entergy New Orleans will conduct its remaining interstate crossing work in December and in January 2016, with the entire second phase being completed by March 2016. 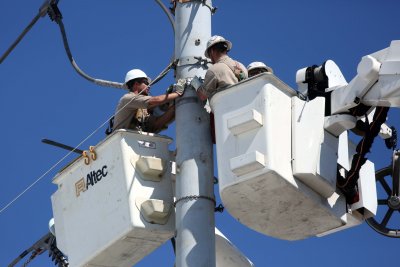 "Unlike the first phase -- Ninemile generation-Napoleon substation -- where crews worked mostly in residential neighborhoods, the second phase requires project crews to work over I-10 near downtown New Orleans," said Charles Rice, president and CEO of Entergy New Orleans, Inc. "Since a safe, accident-free environment for both the general public and project crews continues to be our top priority, we have been involved in extensive planning that will allow us to maintain that focus with the least amount of impact to the general public."

Entergy has coordinated with the Louisiana Department of Transportation and Development and Louisiana State Police to determine non-peak times for short, intermittent I-10 closures to ensure safety for all.

The first I-10 closure will take place at South Telemachus Street and South Genois Street, both of which are located near the Xavier University campus. During the short, intermittent closures, police will stop traffic on I-10 in both directions. Louisiana DOTD digital message signs are in place to alert drivers about the closures, and traffic controls will be placed at the designated on-ramps.

The remaining I-10 crossing work will take place at South Galvez Street in December and at Lafayette Street in January 2016. Entergy New Orleans will be sure to notify everyone in advance.

"We are committed to ensuring timely delivery of information through multiple communications channels," said Toni Green-Brown, public affairs manager for Entergy New Orleans. "Traffic and segment alerts, with related timelines, are available to the general public on the Power to Grow NOLA website to complement and reinforce the I-10 signage and traffic control presence at the designated on-ramps."

Multiple project crews will be working simultaneously and will use very large equipment including 24-foot-wide bucket trucks and 120-foot cranes at each of the existing steel transmission poles crossing the designated portion of I-10. Several stages of work will occur during each segment, and each stage of work will have different impacts. The initial stage is called a "pre-pull."  The next stage is called the "pull." After the "pull" is complete, Entergy bucket trucks and cranes will return to the steel pole locations to complete the "post-pull" work.

This transmission project represents a $30 million capital investment in the electric transmission infrastructure as Entergy prepares to deactivate the aging Michoud generating facility, which originally was placed into service during the 1960s. These upgrades are required by the Midcontinent Independent System Operator prior to the planned 2016 Michoud deactivation, and will enhance reliability, increase transmission capacity and help ensure the availability of affordable power now and into the future.