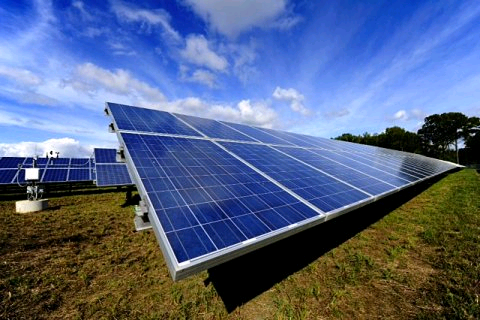 "For Entergy Arkansas, meeting the needs of our customers now and in years to come means embracing new technologies in our industry that make sense for our customers and for the communities we serve," said Hugh McDonald, president and chief executive officer of Entergy Arkansas. "Our generation portfolio is already one of the cleanest in the country. In 2014 our electricity generation consisted of 71 percent emissions-free nuclear energy, which is both good for the environment and good for the low cost and rate stability it provides. Both nuclear and solar provide emissions-free power and a natural hedge for energy price fluctuations due to uncertain environmental regulations and natural gas price volatility," McDonald said.

The project will consist of an array of stationary solar panels covering nearly 500 acres and will be capable of generating enough clean energy to power approximately 13,000 homes. A new substation will be built in Arkansas County to interconnect the solar facility to Entergy Arkansas' transmission system.

"Our strategic goal is to modernize and enhance the reliability of the grid and improve the efficiency and environmental footprint of our generation resources. This will place Arkansas in a position to grow by creating jobs through attracting new businesses and expanding existing ones, all while keeping our rates lower than the national and regional averages," said McDonald.

As part of the planning process for the project, Entergy Arkansas entered into a power purchase agreement with an affiliate of NextEra Energy Resources, LLC, the developer of the solar facility and one of the country's largest solar energy providers, for all of the energy and environmental attributes, including all renewable energy credits available from the project. The agreement fixes the energy price for the 20-year term of the contract, an important benefit for all Entergy Arkansas customers, and is estimated to provide approximately $25 million of savings over its 20-year term.

"We are proud to work with Entergy Arkansas to bring the state its largest solar power facility and help Arkansas bring much-needed jobs and economic benefits to families and businesses throughout Arkansas County," said Mike O'Sullivan, senior vice president of development of NextEra Energy Resources.

During the construction phase, NextEra Energy Resources expects to employ approximately 200-300 workers and anticipates that tax contributions to the State of Arkansas will be approximately $8 million.

In addition to this solar project, from 2014 to 2017, Entergy Arkansas plans to invest $2.4 billion on generation, transmission and distribution improvements to the state's electrical infrastructure.

Forward-looking statements are subject to a number of risks, uncertainties and other factors that could cause actual results to differ materially from those expressed or implied in such forward-looking statements, including (a) those factors discussed elsewhere in this news release and in Entergy Arkansas' most recent Annual Report on Form 10-K, any subsequent Quarterly Reports on Form 10-Q and Entergy Arkansas' other reports and filings made under the Securities Exchange Act of 1934; (b) uncertainties associated with rate proceedings, formula rate plans and other cost recovery mechanisms; (c) uncertainties associated with efforts to remediate the effects of major storms and recover related restoration costs; (d) nuclear plant relicensing, operating and regulatory risks, including any changes resulting from the nuclear crisis in Japan following its catastrophic earthquake and tsunami; (e) changes in decommissioning trust fund values or earnings or in the timing or cost of decommissioning nuclear plant sites; (f) legislative and regulatory actions and risks and uncertainties associated with claims or litigation by or against Entergy Arkansas or its subsidiaries; (g) risks and uncertainties associated with strategic transactions that Entergy Arkansas or its subsidiaries may undertake, including the proposed acquisition of the Union Power Station in El Dorado, Arkansas, including the risk that any such transaction may not be completed as and when expected and the risk that the anticipated benefits of the transaction may not be realized, and (h) economic conditions and conditions in commodity and capital markets during the periods covered by the forward-looking statements.