Estimated restoration times given for customers served by heavily-damaged substations

BEAUMONT, Texas – As flood waters recede, Entergy continues restoring power to those who can receive it. Since yesterday, more than 20,000 customers were restored, and crews continue to work to restore outages.

As of 2 p.m. today, nearly 25,000 Entergy Texas customers remained without power – that is down from 192,000 customers affected by this storm. Many customers have seen multiple outages that we have restored. 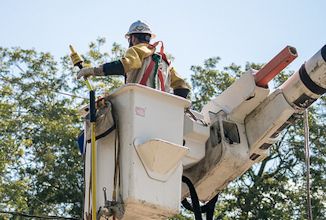 We expect that approximately 8,000 additional customers will be restored by end of day Monday.  These are customers whose service is not sourced from substations that experienced major flooding. For the remaining 16,800 customers, we estimate that it could take up to 10 days before these customers are fully restored, as long as they can take power. These customers are either served by substation equipment that was heavily-damaged by flood waters, some of which are still flooded, or are still currently inaccessible due to high water.

“Harvey’s flooding caused major damage to very advanced equipment that provides power to a large number of customers.  Unlike distribution lines and poles, substations are much more complex parts of the power grid that includes electronics and computers to protect the electric system,” said Sallie Rainer, Entergy Texas president and CEO. “We know any time without power is frustrating, and we are working on possible alternative solutions that could get customers back on sooner.”

Some of the temporary solutions include re-routing customers from other circuits and using mobile substations to serve customers while work is performed to return the permanent substations to service.  These solutions require bringing in massive equipment from other electric companies in Texas and neighboring states. If equipment deliveries are delayed for issues such as flooding or damaged roads in the area, that could affect restoration times.

A team of about 2,400 people from four states are working to restore power. The historic and catastrophic flooding caused by Harvey has been a major hurdle to crews’ accessibility in certain areas and caused severe damage to the five substations affected by water.

Entergy Texas will continue to communicate with affected customers throughout the restoration process, and asks all of our customers to please be patient as we rebuild and restore.