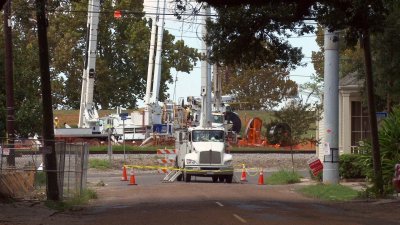 "Throughout the first phase, our top priority was to have a safe, accident-free environment for both the general public and project crews," said Charles Rice, president and CEO of Entergy New Orleans, "and not only did we complete it safely, we did so earlier than originally planned. We extend our gratitude to the general public and our customers in the Audubon Park, upper Magazine Street and Annunciation Street areas for their cooperation, and we want all customers to know that the same safe, accident-free environment will be our top priority on the second phase as well."

Phase II affects the Carrollton-Hollygrove area, including Cambronne Street, through the outer portions of the Xavier University footprint.

"Entergy is committed to ensuring the timely delivery of information through multiple communications channels. Our Power to Grow NOLA website provides detailed project progress information and detour maps for our customers and the general public," said Toni Green-Brown, public affairs manager for Entergy New Orleans. "Customer service representatives will be visibly present and available for residents and business owners to ensure that everyone knows the location of the project work zones, safety procedures and timelines."

Customers in the impacted areas will receive specific information about the transmission line replacement procedure and how it will affect them. In addition, the Power to Grow NOLA project hotline (504-670-3624) and email address (powertogrownola@entergy.com) are available for customers to voice their project-specific questions and concerns.

On Oct. 5, multiple crews will work simultaneously on the designated streets and will use very large equipment including 24-foot-wide bucket trucks and 120-foot cranes at each of the existing steel transmission poles. Several stages of work will occur during each of the 20 project segments, and each stage of work will have different impacts. The initial stage, called a "pre-pull," may block traffic for up to half a day at each of the existing steel transmission poles. In the next stage, called the "pull," all automobile, bicycle and pedestrian traffic along the entire segment will experience temporary delays as the wire is pulled from one end to the other. Delays may last from 15 minutes up to two hours. No parking will be allowed along the work segments during this stage. However, safe crossings will be set up at strategic locations along the route to allow traffic to navigate safely through the work zone while the "pull" is taking place. After the "pull" is complete, Entergy bucket trucks and cranes will return to the steel pole locations to complete the "post-pull" work and may block traffic for up to half a day.

This transmission project represents a $30 million capital investment in the electric transmission infrastructure as Entergy prepares to deactivate the aging Michoud generating facility, which originally was placed into service during the 1960s. These upgrades are required by the Midcontinent Independent System Operator prior to the planned 2016 Michoud deactivation, and will enhance reliability, increase transmission capacity and help ensure the availability of affordable power now and into the future.

In this news release, and from time to time, Entergy New Orleans, Inc. makes certain "forward-looking statements" within the meaning of the Private Securities Litigation Reform Act of 1995. Except to the extent required by the federal securities laws, Entergy New Orleans undertakes no obligation to publicly update or revise any forward-looking statements, whether as a result of new information, future events or otherwise.