NEW ORLEANS – Following Hurricane Laura making landfall near Cameron, Louisiana in the early morning of Aug. 27, Entergy Corporation (NYSE: ETR) announced today its utilities have restored power to approximately 910,000 customers who can accept power, or approximately 99% of customers affected by the storm. Crews have restored power to all customers in Texas and are making significant progress in the remaining hardest hit areas of Southwest Louisiana. Hurricane Laura was the strongest storm to make landfall in Louisiana in 164 years and is tied for the fifth strongest to make landfall in the continental United States.

In response to the widespread devastation caused by the storm, Entergy deployed the largest restoration effort ever mobilized in company history with more than 25,000 workers from 31 states. In addition to Entergy employees, the workers came from more than 230 companies, including 24 other electric utilities. These workers included scouts, field workers, vegetation workers and support staff.

“We are proud of the thousands of men and women who are working tirelessly to safely restore power for our customers,” said Rod West, Entergy Utility Group President. “Hurricane Laura inflicted catastrophic damage on Entergy’s transmission and distribution systems that resulted in approximately 600,000 outages at its peak and impacted more than 900,000 customers in total. Despite the extent of the damage, the teams have made significant progress and expect to restore power to all customers who can take power by Sept. 30.”

With the company operating in a high state of readiness and a significant storm workforce in place ready to respond as soon as the storm passed, Entergy’s swift restoration and rebuilding efforts have received strong and vocal support from federal, state and local public officials. 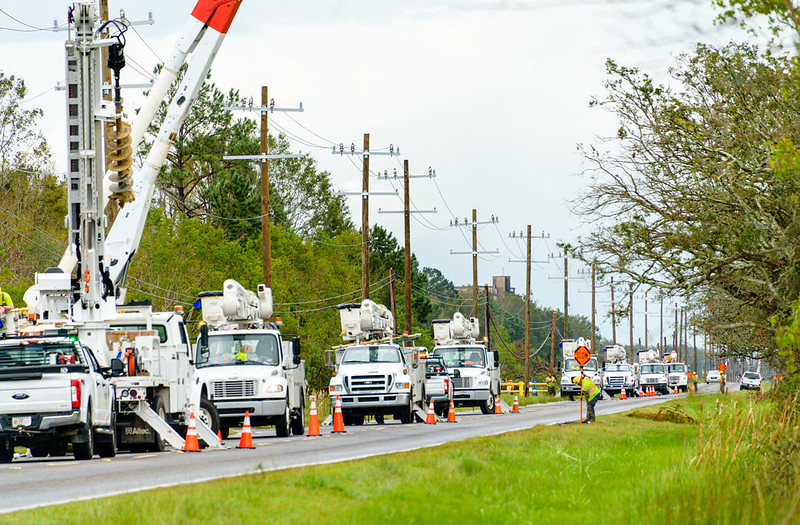 As a result of the storm’s extensive damage to the grid infrastructure serving the impacted area, large portions of the underlying transmission system required nearly a complete rebuild. However, despite the damage, recent investments in modern transmission structures paid off as those assets withstood the storm’s impact and remained intact. The transmission system is the backbone of the electric grid and helps Entergy move power from power plants to the lines serving customers. Given the extent of damage and rebuilding required, power restoration has been as difficult and challenging as Entergy has ever faced.

As previously noted, most of the damage has been repaired, and a clear design and engineering path exists for the remaining work. Restoration workers continue to repair and rebuild damaged high-voltage transmission lines that will bring power into Calcasieu and Cameron parishes, including the Lake Charles area. Completion of this work is expected to allow for power to be restored to the remaining customers who are able to take power by Sept. 30. Work will continue through most of November to complete the transmission system rebuild.

In response to the storm, Entergy’s shareholders have provided financial support to the affected communities. With support from Entergy and other community partners, the American Red Cross deployed 1,800 employees and volunteers to provide shelter, meals, counseling and supplies to those in need. Entergy shareholders also match dollar-for-dollar employee contributions to the American Red Cross. In addition, Entergy’s shareholders have committed $660,000 in charitable contributions to support communities impacted by Hurricane Laura. Company shareholders are also matching employee contributions to the Entergy Employee Assistance Fund, helping our own employees affected by the disaster.

Total restoration costs for the repair and/or replacement of the electrical facilities damaged by Hurricane Laura are estimated to be in the range of $1.5 billion to $1.7 billion. The majority of the costs were incurred by Entergy Louisiana and Entergy Texas. The preliminary estimate for Entergy Louisiana is $1.25 billion to $1.4 billion and the preliminary estimate for Texas is $0.23 billion to $0.26 billion. Hurricane Laura restoration was the first large-scale disaster response that required Entergy to implement COVID-19 safety protocols. Increased costs associated with those safety measures, including lodging and personal protection equipment, are included in our preliminary estimate.

Entergy also expects utility revenues in 2020 to be adversely affected, primarily due to power outages resulting from the hurricane. The company’s initial estimate of lost revenue is approximately $35 million to $40 million, with the majority of this impact occurring in Louisiana. The financial impact of the lost revenue will be partly offset by lower operation and maintenance expenses resulting from redeployment of resources to storm work.

Entergy believes its liquidity is sufficient to meet its current obligations. As of Aug. 31, 2020, net liquidity was $4.0 billion including storm escrows of $0.4 billion.

Storms are an unfortunate but not unexpected part of living on the Gulf Coast, and Entergy has a long history of working collaboratively with its regulators to recover storm costs. Entergy Louisiana and Entergy Texas are considering all available avenues to recover storm-related costs from Hurricane Laura in a way that will minimize the effects on customers, including accessing funded storm escrows and securitization. There are well-established mechanisms and precedent for addressing these catastrophic events and providing for recovery of prudently incurred storm costs in accordance with applicable regulatory and legal principles. Due to the national importance of the refineries, petrochemical and other essential industries that the utility companies serve on the Gulf Coast, Entergy also is exploring opportunities for federal assistance in the restoration and potential hardening of the infrastructure in this area.

Forward-looking statements are subject to a number of risks, uncertainties, and other factors that could cause actual results to differ materially from those expressed or implied in such forward-looking statements, including (a) those factors discussed elsewhere in this presentation and in Entergy’s most recent Annual Report on Form 10-K, any subsequent Quarterly Reports on Form 10-Q, and Entergy’s other reports and filings made under the Securities Exchange Act of 1934; (b) uncertainties associated with rate proceedings, formula rate plans, and other cost recovery mechanisms, including the risk that costs may not be recoverable to the extent anticipated by the utilities; (c) uncertainties associated with efforts to remediate the effects of major storms and recover related restoration costs; (d) legislative and regulatory actions and risks and uncertainties associated with claims or litigation by or against Entergy and its subsidiaries; (e) effects of changes in federal, state, or local laws and regulations and other governmental actions or policies, including changes in monetary, fiscal, tax, environmental, or energy policies; and (f) the direct and indirect impacts of the COVID-19 pandemic on Entergy and its customers.