Entergy Rolls Out $1.3 Million in Grants to Fuel Stronger Communities NEW ORLEANS – Entergy Corporation continues to power local and regional communities through the Entergy Charitable Foundation, which awarded $1.3 million through the foundation’s first round of grants in 2017. The grants benefit 80 nonprofit organizations working in communities across Arkansas, Louisiana, Massachusetts, Michigan, Mississippi, New York and Texas, focusing on education, poverty solutions and environmental programs.

Requests for funding through the Entergy Charitable Foundation are reviewed twice annually. Applications for the second grant cycle can be submitted through Aug. 1 here. 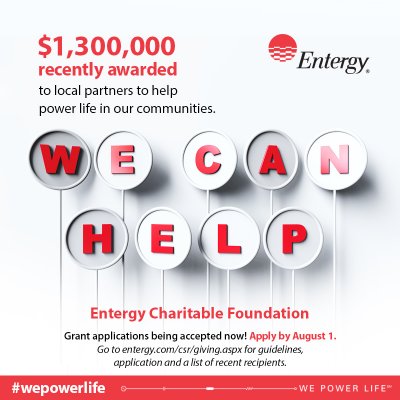 “We are proud to power life in our communities in ways that go beyond powering the electric grid," said Patty Riddlebarger, Entergy’s director of corporate social responsibility. "By providing support to local nonprofits, we are creating a circuit of community partnerships that help build a better community."

Among the programs supported in the first round of 2017 Entergy Charitable Foundation grants are:

A complete list of 2017 first-round grant awards can be found at here.

In 2016, Entergy shareholders awarded approximately $19 million through various grant programs to almost 3,000 nonprofits in communities where Entergy operates. Of that 2016 total, the Entergy Charitable Foundation distributed more than $2.8 million in grants focusing on education, poverty solutions and environmental programs that improve the quality of life in communities served by Entergy. Learn more about our community investments here.