NEW ORLEANS -- On Monday, July 13, Entergy New Orleans will begin technological upgrades to the electric power transmission system along the base of the levee at Monroe Street and Leake Avenue. 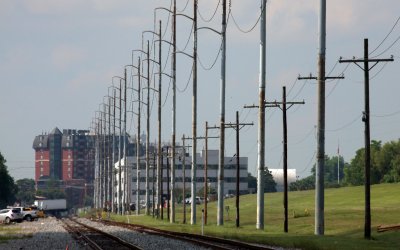 This transmission project represents a $30 million capital investment in the electric transmission infrastructure as Entergy is preparing to deactivate the aging Michoud generating facility, which originally was placed into service during the 1960s. These upgrades are required by the Midcontinent Independent System Operator prior to the planned 2016 Michoud deactivation, and will enhance reliability, increase transmission capacity and help ensure the availability of affordable power now and into the future.

The first phase of the project, Ninemile generation-Napoleon substation, will affect the Audubon Park, upper Magazine Street and Annunciation Street areas. As outlined at the community meetings held in June, residents and businesses located along the project route will be notified in advance as the project progresses into their neighborhoods.

"Our top priority is to have a safe, accident-free environment for both the public and project crews. As a result, on-site safety measures have been tailored to meet the needs of the community and the impacted areas," said Charles Rice, president and CEO of Entergy New Orleans. "Entergy is committed to ensuring timely delivery of information through multiple communications channels to help the general public safely navigate around the work areas."

Preparation for the electric power transmission system upgrade is currently underway along the base of the New Orleans levee, which will result in a temporary closure of the levee bike path from Fern to Walnut streets through Aug. 20, and from Sept. 10 to Sept. 20.

Residents and customers in the impacted areas will receive specific information about the transmission line replacement procedure and how it will affect them. The Power to Grow NOLA website will provide detailed and up-to-date project information for those who are interested. The Power to Grow NOLA hotline (504-670-3624) and the project email address (powertogrownola@entergy.com) have been made available for customers to voice their project-specific questions and concerns.

Multiple crews will be working simultaneously on the designated streets and will use very large equipment including 24-foot-wide bucket trucks and 120-foot cranes at each of the existing transmission poles. Several stages of work will occur during each of the nine project segments, and each stage of work will have different impacts. The initial stage, called a "pre-pull," may block traffic for up to half a day at each of the existing metal transmission poles. In the next stage, called the "pull," all automobile, bicycle and pedestrian traffic along the entire segment will experience temporary delays as the wire is pulled from one end to the other. Delays may last from 15 minutes up to two hours. No parking will be allowed along the work segments during this stage. However, safe crossings will be set up at strategic locations along the route to allow traffic to navigate safely through the work zone while the "pull" is taking place. After the "pull" is complete, Entergy bucket trucks and cranes will have to return to the metal pole locations to complete the "post-pull" work and may block traffic for up to half a day.

"Throughout the duration of this project, Entergy New Orleans customer service representatives will be visibly present and available for residents and business owners to ensure that everyone knows the safety procedures, project work zones and timelines. In fact, this process has already started," said Rice. "In addition, automobile, pedestrian and bicycle traffic plans, complete with maps, will be made available to the public on the Power to Grow NOLA website."

The second phase, Ninemile generation-Derbigny substation, will begin in October 2015 and primarily impact the Carrollton-Hollygrove area, including Cambronne Street, and through the outer portions of the Xavier University footprint.