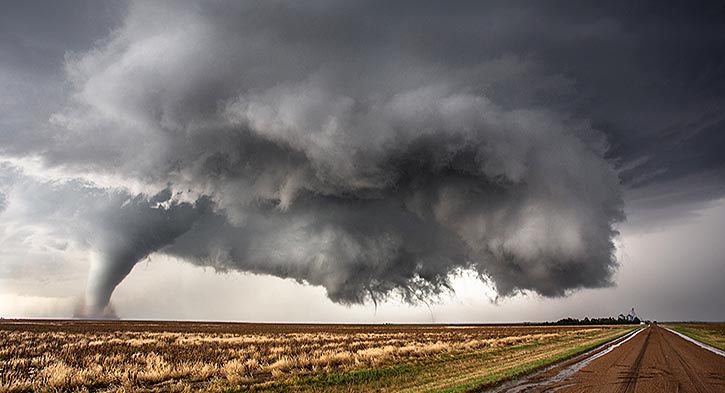 Be ready for nature's most violent storm.

Tornadoes are considered the most violent natural storm. They are formed from powerful thunderstorms, tropical storms and hurricanes. Some tornadoes are clearly visible, with a familiar funnel-shaped cloud extending to the ground. Others are obscured by the storm clouds that form them. Skies where tornadoes form are dark and often greenish, with large, dark, low-lying clouds. Large hail is usually a sign of an impending tornado.

How to Prepare for a Tornado

Because they strike with little or no advance warning and move quickly with wind speeds up to 300 mph, tornadoes are a serious threat to your safety. Having a family emergency plan and a kit of basic emergency supplies on hand is especially important. The following guidelines can also help keep you safe if a tornado strikes:

The Enhanced Fujita Scale (EF Scale) is used to measure tornado intensity after the storm has passed. The EF Scale ranges in six stages of intensity from EFO (winds 65-85 mph to EF5 (winds greater than 200 mph). The EF rating is derived from several factors including known and estimated wind speeds, radar data, damage to structures and vegetation and the very cycloidal marks left on the ground by the tornado.

A tornado watch means that a tornado is possible in your area.

A tornado warning means a tornado is actually occurring. Take shelter immediately. Listen to radio and television reports to learn about the status of the tornado in your area from local officials and what action you‘ll need to take. Listen to local officials to learn about the emergency plans that have been established in your area by your state and local government. In any emergency, always listen to the instructions given by local emergency management officials.